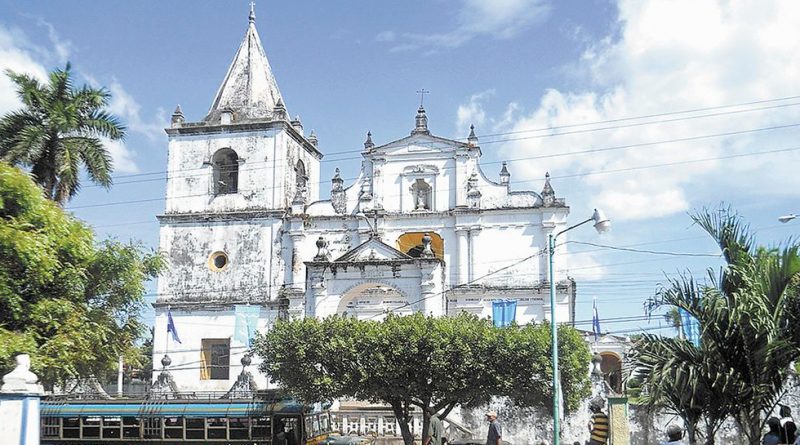 Quick Navigation
El Viejo Nicaragua
El Veijo Chinandega
The Municipality of El Viejo
The fiestas of El Viejo
HOW TO GET TO EL VIEJO:

The Municipality of El Viejo

Just a short distance north of Chinandega is the municipality of El viejo, being the second most inhabited municipality in the area and the largest in the department, as it reaches the Gulf of Fonseca.

The village is of pre-Columbian origin and the chieftain Agateyte lived there. In his honor they called the city Teyte, which in Chorotega means Old.

Its historical center contains several buildings from the colonial period, including the Basilica. The church, of colonial origin, dates from 1627 and is Gothic Renaissance style, dedicated to the Virgin of the Throne, whose image was brought in 1585. The building, which is a national monument, has beautiful altarpieces.

The municipality has several nearby beaches that are perfect for enjoying sea sports and very appreciated by surfers, all well known and easily accessible.

The most famous being the beach of Jiquilillo, located within Estero Padre Ramos and being one of the largest beaches in the country. Here you can surf or sleep at the various hotels on the coast to enjoy the sea.

In addition, eating at any of the food stalls in the area can be an exquisite pleasure, fresh fish abounds in the dishes of the dining rooms.

Within the municipality of El viejo is also the Reserva del Cosigüina, located in the peninsula of the Gulf of Fonseca and being one of the most precious natural wonders of the area.

The fiestas of El Viejo

If you visit El Viejo during the religious festivities of December 6th you will be able to participate in the silver washing, that is, the cleaning of the Virgin's jewels.

The first week of August, specifically from the 1st to the 15th, San Roque festivities are celebrated, the patron saint of the town, during those days all El viejo is overturned in the festivities and you can enjoy them, as well as observe traditional dances, bullfights, etc....

HOW TO GET TO EL VIEJO:

To get to El Viejo you must take a road that comes from Chinandega in the north direction - it is properly signposted and has no speed. If you want to take a bus, there are many intercity buses that leave from the bus terminal and connect both municipalities.