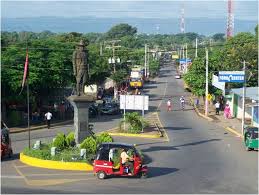 Ciudad Sandino is one of the youngest cities in Latin America and undoubtedly the youngest in the region. It was born as a neighborhood of Managua in 1970, where those affected by heavy flooding on the Malecón were relocated to the area.

It was then that the Government created the project of Permanent Organization of National Emergency with the abbreviations OPEN Nº3, in the negotiation of cotton lands that belonged to the Blandón Family.

With the earthquake of Managua (1972) it was extended and with the triumph of the Sandinista revolution of 1979 was given the present name.

In 1979, in the intensity of the National Liberation War, many neighborhoods, especially the eastern neighborhoods of Managua and other departments of the country, migrated families in a massive search for security.

The areas where this family was settled gave rise to the new zones and settlements that are known today.

With the triumph of the Popular Sandinista Revolution, the popularized name of OPEN 3 was replaced by that of "Ciudad Sandino", which was used informally until the year 2000 when the National Assembly of the Republic of Nicaragua officialized it

It is the zone that has undergone more population growth of Managua, to the level that in the year 2000 was declared independent municipality of the capital and elevated to the category of City.

In itself it does not have much tourist interest and is practically a residential city, although there are good restaurants and places where to eat, as well as hotels and lodging for travelers.

Although it owns part of the coast of Lake Managua, still it is not exploited touristy. The festivities are celebrated in honor to San Francisco Javier the 3 of December

How to get to Ciudad Sandino?

Getting to Ciudad Sandino from Managua is simple, since it is located at 12 ½ km of the new road towards the department of León.