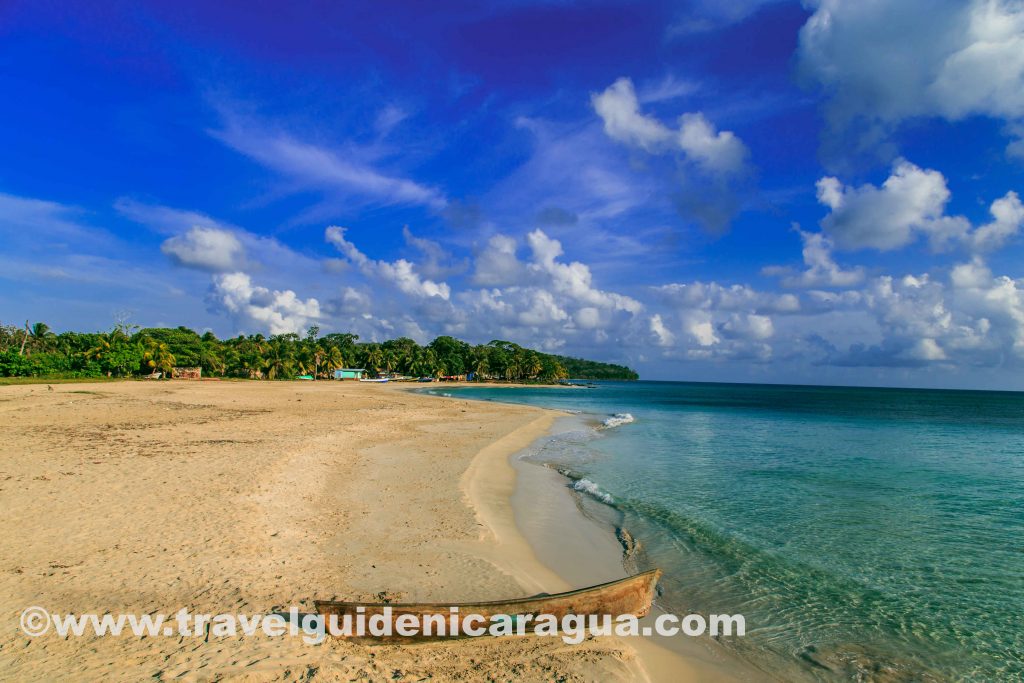 The archipelago of Corn Island is formed by two islands, the most famous of the caribbean coast of Nicaragua. Big Corn Island and Little Corn Island.

Big Corn Island or Isla del Maíz, is the largest of the archipelago, is located 90 km off the coast of Nicaragua and has an area of ​​only 13 square kilometers.

It is a dream island, truly is what is called "A Tropical and Caribbean Paradise".

With beautiful white sand beaches and crystalline coral reef waters, it is one of the natural beauties of the country and of all of Central America.

An exabruptive flora with beautiful palm trees, coconut trees and tropical vegetation make it a destination that can not be missed if you travel in time to Nicaragua.

Corn Island has been recognized as one of the best beaches in the world, and it is not by chance.

Most of the island is flat and an important part is occupied by ciénagaso suampos with big trees or mangroves that conform an enormous biological wealth local. Creating a unique ecosystem on the island.

Corn Island was discovered in 1504 by Christopher Columbus on his last voyage. The inhabitants of the islands at that time were indigenous natives.

Corn Island belonged to the British Crown from 1655 to 1894. In 1894 it became a colony of the United States until 1971 that became Nicaraguan sovereignty.

Corn Island was sheltered by pirates for centuries and today it is still possible to find immersed in the depths of its shipwrecked waters of that time.

At present the island is inhabited by descendants of the first indigenous communities, Garífunas and Miskitos,

About 8,000 people live in Corn Island and are mostly engaged in fishing or tourism. The language of the island is Creole English.

Corn Island was declared by Law, National Tourist Patrimony in the year 2013.

The island has two hills of some height, Mont Pleasant and Quinn Hill.

One of the charms of Corn Island is that it is not yet explored touristy in a massive way, it still retains its natural charm.

In spite of the fact that in the last years the tourist supply has been developed to meet the growing demand.

There is for all tastes, demands and pockets.

There is a Sustainable Tourism Office in Corn Island, with the objective of developing tourism in the island that is neither aggressive nor destructive of the environment nor the culture of the population.

Most of the local shops are in the Brik Bay neighborhood, although there are several shops around the island where you can stock up on what you need.

Corn Island is the perfect place to practice adventure sports related to the sea.

Scuba diving, deep-sea fishing or boat trips are activities of great trajectory and tourist demand in the area.

The coral reefs are amazing to see.

The largest beaches are in the southern half of the island, the most popular being the South West Bay,

Turquoise waters, white sand and considerable size, where you can find restaurants and lodgings at affordable prices.

While in the North the terrain is more abrupt and there are beautiful coral reefs, although there are not many beaches from where to access the sea, there are very precious for their tranquility and beauty.

The place is excellent for snorkeling or scuba diving. Being very popular places like North End or Sally Peaches.

Undoubtedly, it is an unforgettable experience to swim with turtles, dolphins, hammerhead sharks or sharks and observe the richness of the seabed, with spectacular coral reefs and mysterious marine caves.

It is possible to take dive courses at various levels, from the most basic to advanced courses, where you can obtain the world-recognized certificate such as Open Water Certification (PADI)

There are several companies that are offered to domestic and foreign tourists to carry out any of these experiences.

But the islands are also the perfect place to relax, enjoy the beaches and stroll with tranquility.

The island breathes an air of tranquility and relaxation without equal.

We guarantee that you will forget your problems while you are on the island and your stress will be removed.

Today there are several hotels that offer the possibility of practicing yoga and offer spa services.

To top it all off his brilliant natural beauty; Corn Island, like the other sites on the Nicaraguan Atlantic Coast, has incredible cuisine.

And is that the coastal people love to cook fish in a thousand varieties and add coconut dressings that give a spectacular flavor and very characteristic to the meals, do not forget to try the traditional dish Rondón (RunDown),

"Which consists of an exquisite soup of fish, vegetables and coconut water.

The meals are accompanied by the delicious and typical Pan de Coco instead of the typical Tortilla from the rest of Nicaragua.

If you want, you have the opportunity to go buy fish and seafood, directly to the fishermen when they arrive at the different beaches after their fishing day. Corn Island is undoubtedly one of the places where it is possible to buy fresh seafood at super cheap prices.

Along the island are numerous restaurants and family businesses offering typical meals.

At night the visitor can enjoy the Caribbean nightlife in its discos and music bars and learn to dance to the sensual rhythm of the islanders,

If you come to visit Corn Island (the largest), we recommend spending a couple of days at Little Corn Island, as it is also an incredible site to visit and where you can breathe a unique atmosphere.

WHAT TO DO IN CORN ISLAND

Absolutely every traveler who goes to Corn Island ends up discovering it by itself, since it is one of the charms that has to reach the area.

But we give you some clues about what to visit.

Although there is a large neighborhood in the port of arrival, the island does not have an urban core as a city, but the houses are scattered all over the island forming neighborhoods, mostly in the north and west areas of the island.

The best beach on the island is found in the South West Bay, with calm and coral waters.

Long Bay and Silver Sand are natural beaches with typical island vegetation. In them they can give excellent walks, since the beaches are long and calm.

The waters can be a bit dangerous if the sea is curly, so we recommend having some caution when bathing in them.

If you like diving, you can enjoy it in the Coral Reef area, in the northeast of the island.

A coral reef that will surprise you by its spectacular seabed.

The patron saint festivities are celebrated in the last days of August, known as the Crab Festival.

The liberation of the island slaves in 1841 is commemorated on August 27th. Days filled with color, music, party,

Big Corn Island can be reached by air and sea.

The trip takes an hour and 10 minutes, but from Bluefields the journey is reduced to just 15 minutes.

The blue and green shades of the Caribbean waters, due to the optical effect of the algae that cover the seabed,

Are perfectly distinguishable from the air in flights of low height and turn them into a true visual spectacle.

CORN ISLAND HOW TO GET THERE?

If you do not like to travel by plane or prefer a little more adventure,

You can get to Corn Island by leaving Managua by bus at the Mayoreo station to El Rama,

From there you will have to take a boat and descend the Escondido river - it is advisable to take something to avoid getting wet on the way to Bluefields and finally arrive at Corn Island with the boat.

The sea voyage from Bluefields to Corn Island takes about four hours and takes place on small craft.

From Great Corn Island to Little Corn Island the trip is done in small outboard pangas that continually depart from the port of Corn Island.