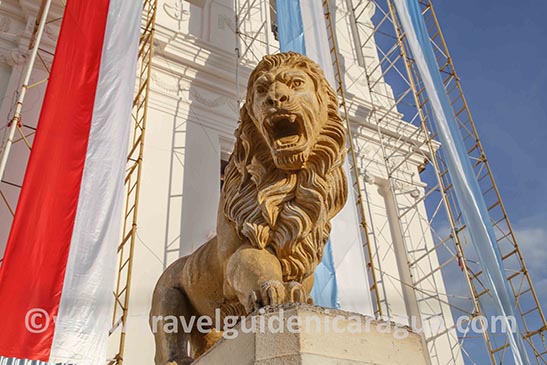 León is perfect for tourism in Nicaragua.

Leon is situated in northern Nicaragua, and near the border with Honduras, we find this perfect spot to come and visit for a few days. 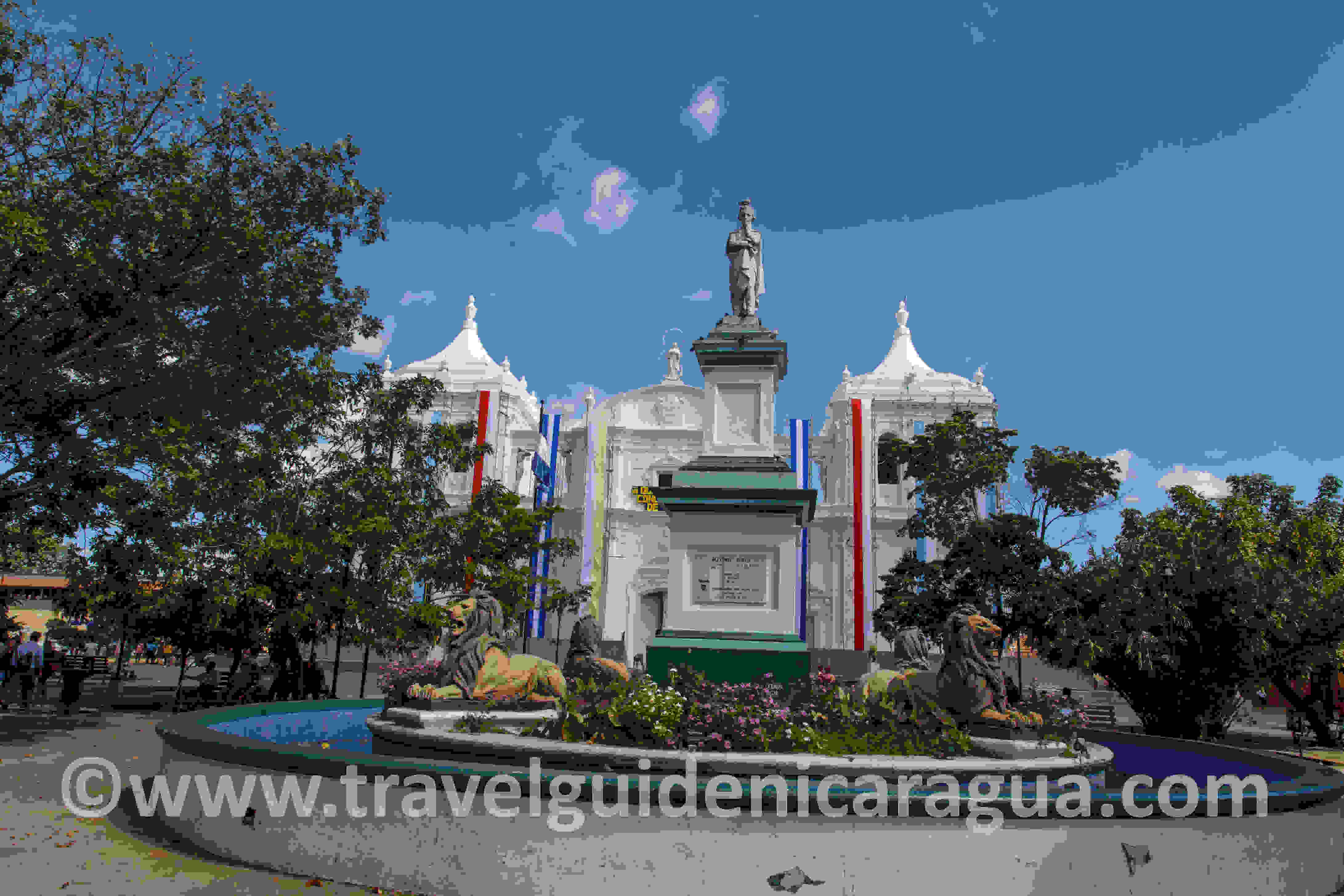 The department of León is characterized by spectacular landscapes, beautiful beaches, volcanoes and a number of attractive little explored destinations.

In this department are located four volcanoes of the Cordillera de Los Maribios and also there are beautiful beaches, historic towns and especially churches of beautiful architecture.

Located in the west of the country, also known as "La ciudad universitaria" or "La Ciudad Metropolitana", the department of León has an area of 5138.03 km² and an approximate population of 441,308 inhabitants distributed in its ten municipalities: Nagarote, La Paz Centro , The City of León, Quezalguaque, Telica, Larreynaga, El Sauce, Achuapa, El Jicaral and Santa Rosa del Peñón.

From this land have arisen important personages like the Prince of the Castilian letters Rubén Dario, Solomon of the Forest, Alfonso Cortes and Azarías H. Pallais; The king of the waltz José de la Cruz Mena, among other illustrious personages from Leon, as much of the national independence as of the intellectual life of the country.

The departmental capital, the city of Leon, is the second most important of Nicaragua and one of the most majestic colonial cities of all Central America, since it was one of the first cities that founded the Spaniards when arriving to the continent.

The city of León, whose original name is Santiago de los Caballeros de León was founded on June 19, 1524 by Francisco Hernandez de Cordoba, near the indigenous village of Imabite and on the shore of the Momotombo volcano.

Although with less population than Managua, Leon has been the intellectual headquarters of the nation, with a university founded in 1813, being the last founded in America before independence and that was the most important of Central America for a complete century. León is also an important industrial and commercial center of Nicaragua. 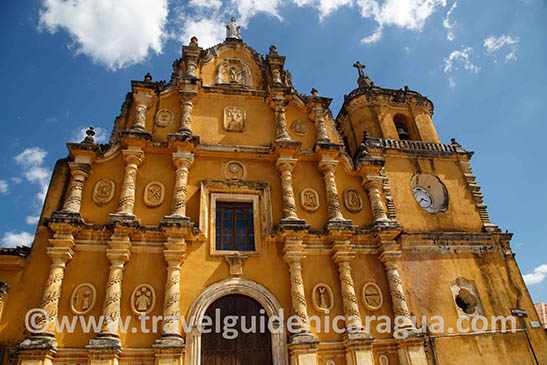 Leon was the first capital of the Revolution in Nicaragua:

Until the appointment of Managua as capital of Nicaragua, Leon rivaled with Granada for such representativity. And he prides himself on being the first Capital of the Revolution.

It is one of the most beautiful colonial cities in Central America and has two great monuments declared Patrimony of Humanity. The city of Old Lion and the Cathedral of Leon.

The main attraction of the city of León is its rich monumental heritage. 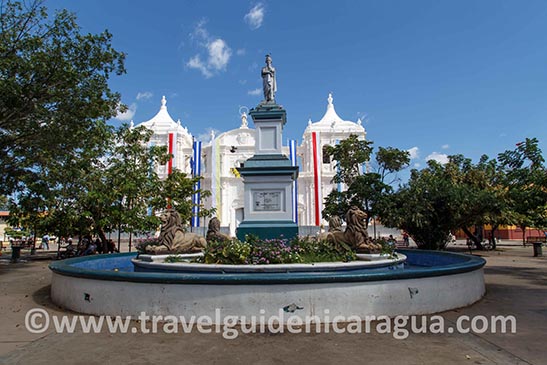 It is well known for its varied architectural heritage and for its numerous churches.

First, being the most famous and declared World Heritage by UNESCO, is the Insigne and Royal Basilica Cathedral of the Assumption of the Blessed Virgin Mary, the Cathedral of Leon. Typical baroque colonial building, it was built between 1747 and 1814, the towers are neoclassical in style and very well preserved.

Due to the robustness of its walls it has endured well several earthquakes, volcanic eruptions of the Cerro Negro volcano and wars. In 1824 several cannons were placed on its roof during the site of the city by conservative forces and in the insurrection of June and July of 1979, against the dictator Anastasio Somoza Debayle also it was scene warlike. This cathedral is the largest in Central America.

The city is made up of several neighborhoods and neighborhoods that extend throughout the city, many of them take the name of the nearest church, as the case of El Laborío district.

The most famous, undoubtedly, is the Indigenous neighborhood of Sutiava, where still today is settled an indigenous community.

It was the first episcopal seat of Nicaragua, from 1531, reason why it is one of the oldest dioceses of America. In it is the tomb of the poet Rubén Darío, at the foot of the statue of St. Paul, father of modernism and considered Prince of the Castilian letters.

In its crypts, designed to withstand the earthquakes, some of the nation's illustrious characters are buried, such as the poets Solomon de la Selva and Alfonso Cortés; The hero Miguel Larreynaga and the musician José de la Cruz Mena. 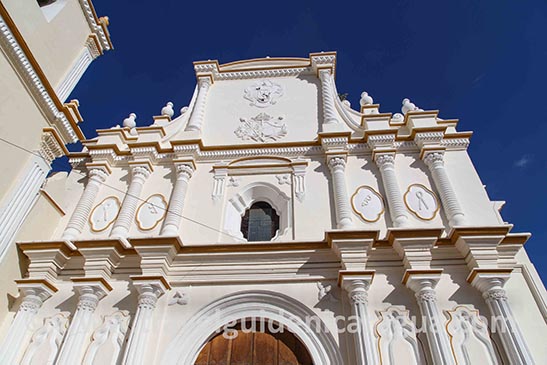 The churches in León:

The church San Juan de Bautista de Sutiava is considered the largest church after the cathedral of León and is also of great architectural interest. It was built in 1698 and completed in 1710. During the Central American War, in 1844, the dome crowning the tower was destroyed and had to be rebuilt in the early 20th century.

The church of San Francisco, part of the convent of San Francisco, one of the oldest in Nicaragua, founded in 1639 by Fray Pedro de Zuñiga. With a facade renovated at the end of the XIX, in the interior it conserves two good examples of plateresque altars.

The Church of El Calvario, interestingly urbanistic due to its spatial distribution, this church dates from the first half of the XVIII century although it was modified in its north tower in the XX century.

The Ruins of San Sebastián Church, built at the end of the 17th century as chapel of the Cathedral and was one of the first religious buildings in the city. Colonel Joaquín Arrechavala rebuilt it at the end of the eighteenth century. It was bombed during the capture of Leon by the Nicaraguan Air Force planes in 1979 and as it was of adobe it was easily destroyed unlike the other churches, that to be built of bricks and quarry stone, endured the combats. 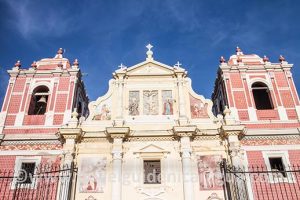 To build it was necessary to demolish the old church. Surely that happened in the second half of the eighteenth century. On the present temple of La Merced, Diego Angulo Iñiguez, in his work "History of Hispanic American Art" written between 1945 and 1950, tells us that: "After the Cathedral, the most important Baroque temple preserved, , Also in Leon.

It is said that the construction was under the direction of Pascual Somarriba, who according to Julio Valle-Castillo, in his work "La Catedral de León de Nicaragua", could also have directed the construction of the current León Cathedral, In 1747. The plans of the temple were elaborated by the Fraile Mercedario Pedro de Ávila. This friar Pedro de Ávila arrived in Nicaragua in 1766, "as a skilled architect for the present cathedral of León". It should also be said that the present temple of La Merced is the only one in Nicaragua that presents its bell tower outside the facade line, which suggests that it was built later. 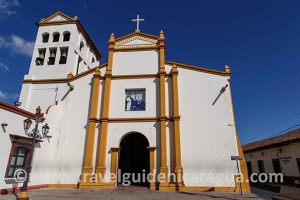 Other places of interest in León:

The Municipal Theater José de la Cruz Mena: Located one block west of the central park is the old Municipal Theater, was built by the members of the Leon Atheneum in 1885 and rehabilitated a few years ago from damage caused by a fire.

It is of interest to visit it and know the interiors that will make it move to the beginning of the last century.

The markets in León:

There are three major markets in the city. The central market, which is located behind the Cathedral, is where you can live the experience of visiting a popular market and know the bustle of Nicaraguan daily life.

The second market, located next to the church of San Juan, near the old railway station, maintains a good commercial activity and supplies much of the city. The third, located next to the bus terminal of the Coyolar district is the smallest of the three, although it is well stocked and you can find any product. There is also another well-stocked market in Sutiava.

Located near the church of San Juan, the railway station is worth being visited for its architectural interest, although it is degrading by the passage of time and is a loophole of what was. Nicaragua stopped having a train in the early 90's during the government of the UNO of Doña Violeta Chamorro.

It is located near the La Salle School, in the house where the Great Poet was raised with his aunt Bernarda Sarmiento and Colonel Felix Ramirez. In the museum you can visit personal belongings of the writer and the house, as well as period furniture and various objects. It is curious to go there and learn a little about the Nicaraguan history of the previous century.

Located one block north of the Archivo Rubén Darío Museum. In it you can visit several artistic works of great masters of the baroque and Renaissance. The museum occupies two Leonese colonial houses of architectural interest and was founded in 1996 by Ricardo Ortiz and Patricia Gurdián.

In León there are tourist activities for all tastes: climb any of its eight volcanoes, enjoy the beaches of the Pacific or surf in them, the best known are divided between the city of León and the municipality of Nagarote.

Visit the historic ruins of Leon Viejo, a city that was buried in 1610 by the eruption of Momotombo Volcano and declared a World Heritage Site for its importance; Stroll through the streets of the city of León and visit its famous cathedral, tomb of Rubén Darío and also world heritage, or its various churches, museums or galleries. 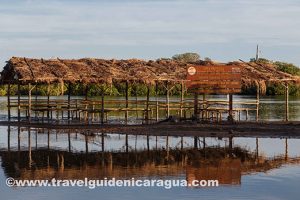 Nowadays Sandboarding has become very fashionable among the most daring tourists. This activity consists of descending on a table similar to a Snowboard the Cerro Negro Volcano. If you are interested in practicing this activity, we recommend that you speak with one of the tour ﻿﻿operators ﻿﻿of León who organize it.

The most important beaches in the city of León are Poneloya and Las Peñitas, both with tourist infrastructure. From the peñitas you can visit the island of Juan Venado, nature reserve of 22km long. You can practice surfing on them.

The beach of Las Peñitas is the perfect enclave for a family or couple vacation. Both are very quiet and not very crowded, except for Easter and Christmas days. There are quite a few hotels in Las Peñitas that offer quality service at low prices. 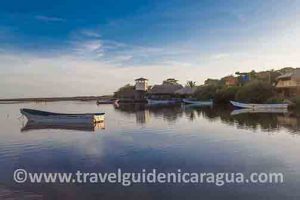 If you prefer to go to other beaches in the department of León, the most important beaches of Nagarote are those of Puerto Sandino, El Velero and El Transito. The first is the most appreciated for surfing. All of them have tourist infrastructure.

The hotel offer in Leon is one of the most varied in the country. You can find from cheap hotels and hostels to luxury hotels with all the amenities.

We recommend that before arriving in the city, book your room in advance so you will not find yourself without a place to sleep. You can see the best hotels and hostels in León Nicaragua from our descriptive directory.

The typical food of León:

The old Indian is the typical dish of the area, which consists of a delicious stew of corn and meat flavored with spices and citrus. Fresh fish and seafood are also highly prized among visitors

HOW TO GET LEÓN NICARAGUA?

Getting to León from Managua is easy. The fastest way is with the New to Leon road, which will take you directly to the city of León.

If you want to do it by bus, also from Managua, you should go to the Israel Lewites Market, where buses constantly leave for the city of León or looking for the minibus transports that leave the stop of the UCA.

If you come from the north or central part of the country, the most feasible way to get to León is to do it from the Pan-American highway to the junction of San Isidro, where you have to take the León road.