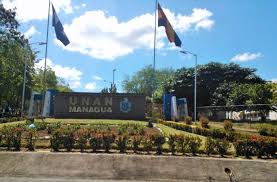 The National Autonomous University of Nicaragua (UNAN) is the oldest university in Nicaragua, created in 1958.

It was the second created in Central America, and the last of the Universities established by Spain during the Colony in America. Having antecedents in the University founded in the city of Leon in 1812.

On April 29, 1982, by decree of the Governing Board of National Reconstruction, UNAN-Managua was constituted as an independent institution and began its operation in 1969.

They aim to contribute to the development of the country, through teaching and research with a multidisciplinary character, permanent and inclusive education, social projection and cultural extension, within a framework of genuine cooperation, equity, commitment, social justice and in harmony with environment.

The UNAN Managua has become one of the largest references of the city, being the largest and most important university in Nicaragua, which has played an important role in the history and formation of the country.

The call for admission to the UNAN Managua is one of the most talked about events in the country, since each year more than 13,000 students are enrolled and the entrance examination shows about 12,973 students from all over Nicaragua. For those, UNAN-Managua offers more than eight thousand seats each year.

At UNAN Managua, only those students who pass the admission exam with the best averages are able to enter, so the university makes a second call directed to students who did not qualify in any of their first two options.

So far the highest recorded average was 98.8 percent.

And only the students with the best averages, receive during their training 1,100 córdobas monthly as part of the scholarship of academic excellence.

The UNAN Managua works with nine Faculties and a Polytechnic Institute of Health, distributed in three university campuses in the city of Managua:

It also has four regional university offices located in the cities of Estelí, Matagalpa, Carazo and Chontales.

Currently at UNAN-Managua, they study more than 40,000 students between undergraduate, graduate and special programs.

It has a teaching staff of 847 teachers, mostly with master's and doctoral degrees. In its administrative area there are about 1232 employees.