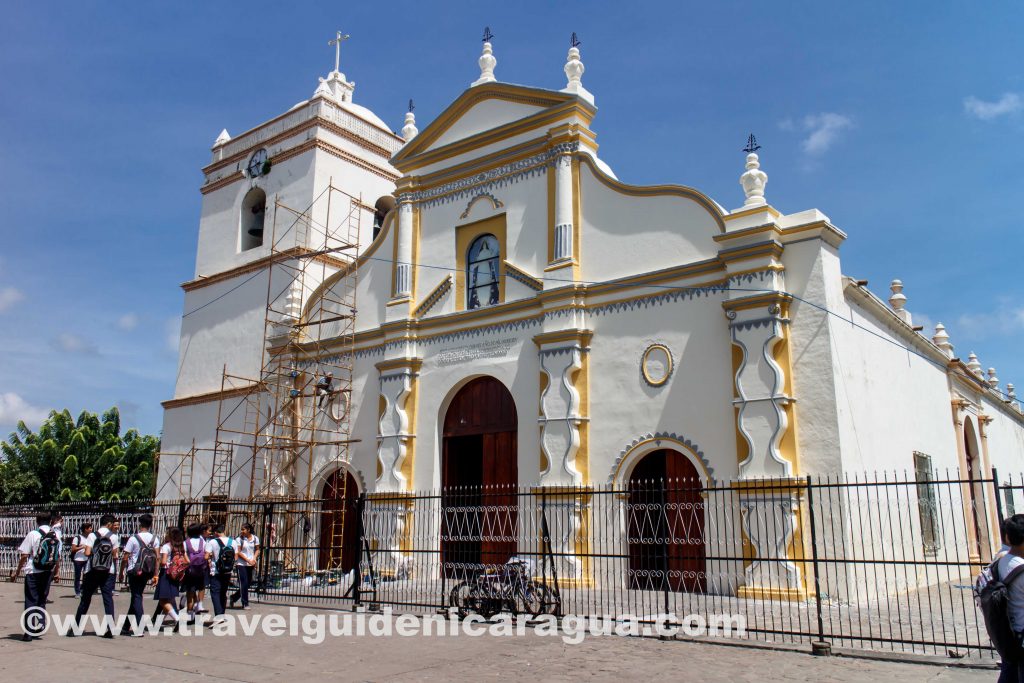 Located between the lakes Cocibolca and Xolotlán, Masaya is the smallest department of Nicaragua and one of the most densely populated, is part of the denominated Metropolitan Region of Managua.

The department of Masaya is very tourist, famous for its handicrafts, culture and folklore, in addition to possessing a huge natural potential. Masaya is worth to visit and know thoroughly.

Masaya presents a varied territory, in the municipalities of the south, Catarina, La Concepción, Masatepe, Nandasmo, Niquinohomo and San Juan de Oriente, the terrain is uneven and has elevations of more than 500 meters above sea level, Temporary rivers that descend from the Meseta de los Pueblos, from Carazo and flow into the Laguna de Masaya. The municipalities of the north, Masaya, Nindiri and Tisma present a flat territory, characteristic of the Interlacustre Plain.

The departmental capital has the same name as the department and is known as the city of flowers. Located just 30 kilometers southeast of Managua, Masaya is also the main producer of handicrafts nationwide. Do not miss visiting its two markets, the New and Old, to observe and buy handicrafts from all over the country. Owning a beautiful old town, it has unrivaled attractions in the country, its old Coyotepe fortress or the malecon are very interesting to know. It also has a great tourist and recreational offer, hotels, lodges, bars, pubs and discos.

The City of Masaya

Masaya is one of the most important cities in Nicaragua. Located to the southwest of Managua, of which it separates it just 28 km, and to 14 km to the north of Granada is located to the edge of the lagoon of the same name and to the feet of the volcano Masaya - also called Popogatepe, "mountain that burns" in Chorotega

Masaya, formerly called "Mazatlan", a word derived from the language of the Nahuas - a variant of Nahuatl or pipil - and comes from the word mazatl meaning "deer" and the particle -tlan that denotes "place or place." That is, "place of deer".

It was built by the Spanish conquistadors alongside an indigenous village called Monimbó. Name that is currently used by the Indigenous community of Monimbo.

It is known as "ciudad de las flores" and "Cuna del folklore nicaragüense". Nicknames that were placed for being the city where flowers are grown and sold to the rest of the country and for the cultural nature of the city, where several traditional dances and dances have been born, as well as most handicrafts.

The "Masayas" - inhabitants of the city - are well known for their artistic skills and the creation of handicrafts.

The situation of Masaya in Nicaragua makes it an important communications hub in transportation. It has an active manufacturing industry of agricultural products, like tobacco (manufacture of cigars) and processing of natural fibers.

Artisan production is very important, it can be said that it is the center of Nicaraguan handicrafts, with a very strong pre-Columbian culture component, mainly wood, leather, ceramics, stones and fabrics. Industrially they are also produced; Shoes, leather goods, soap and starch.

In this sense it is very interesting to know the different craft centers and small workshops where exquisite pieces are made.

Very recommendable in this sense the visit to the Old Market Masaya, where you can meet a bustling Nicaraguan market specialized in handicrafts and tourism products.

It is just as interesting the market because of its old appearance, although it was restored a short time ago, it remained a characteristic aspect that will go back to later years. This is located just one block away from Central Park.

Also the visit to the New Market is highly recommended, where you can make daily purchases and know firsthand the daily chore of people. In addition to seeing the typical local products.

Architecturally, Masaya has plenty to offer. Standing out from the church of Our Lady of the Assumption, located in the central Park of the City and built in 1750, it is of great interest to preserve almost its original state.

As well as the church of San Jerónimo, which was built in 1833 and welcomes the image of the Masaya Patron, with one of Nicaragua's slimest steeples.

Also worth visiting are the churches of San Juan, San Miguel and Magdalena, located in the Monimbó neighborhood.

The Monimbó neighborhood deserves special attention because it is the place where the indigenous people of Monimbó are located. Located to the south of Masaya and specialized in the manufacture of Crafts, it is impossible to visit it without acquiring any of the ones that are manufactured in the innumerable workshops of artisans that are located in their houses. There you can buy hammocks, shoes, handbags, ceramics, etc. at favorable prices. In addition to knowing firsthand how they manufacture them.

The natives of the Monimbó are known for their hospitality, as well as nationally respected for their heroic contribution to the national war against Walker in 1856, as well as during the American occupation of 1912 or in the revolutionary insurrection of 1978, which each year is commemorated with a March.

Located at the entrance of the city of Masaya coming from Managua and located on a hill from where you can see the whole city, the fort was built at the end of the 19th century and can be visited by a symbolic sum paid upon entry.

In addition to appreciating the beautiful views, in El Coyotepe you can feel the recent Nicaraguan history first hand. It was an important stage during the wars of the beginning of the last century, but it is notorious for being the prison of political prisoners, revolutionaries and opponents of the Somocista regime, characterized by the practice of the most vile atrocities with people.

Another very interesting and very pleasant sight is the Malecon de Masaya, a walk from where to enjoy a beautiful view towards the Masaya Lagoon, with the bottom of the Masaya Volcano. In the walk you can also find several points of sale of handicrafts and hammocks.

Built in 1926 and now rehabilitated as a workshop school, is of interest to know the history of the country that sold its railway in the 90s.

The schedule of celebrations in Masaya is very dense, so it is very easy to match your visit with a local party. Especially if your visit coincides with one of the typical Catholic festivities.

On January 6, the Pass of the Child God is celebrated. During Holy Week, the feasts begin on St. Lazarus Sunday, during which parishioners bring their pets to be baptized at church and continue daily until the end of Holy Week. In April it is celebrated in honor of the Lord of Miracles. In May the feast of the Cross and in June, July and August all the saints of the celestial court as well as the virgins, although of lesser interest.

The most important parties are given on September 30 and are in honor of the patron saint of San Jerónimo. There are many activities organized as well as processions full of flowers, cultural events, folk dances, etc.

During all the celebrations of Masaya, the premises use the characteristic disguises of the Bull-Deer. Especially in the time of Carnival, where they are increasingly better known nationally.

Among the folk acts that have been born in this land stands out for its singularity "El Toro venado". It was born as a procession for a promise to the patron saint of the city, San Jerónimo, and soon became a carnival. The procession, in which the venerated image is continued, is a parade of disguises where only men participate, many of them disguised as women. The union of the ancestral customs with the Christian ones has given place to this cultural expression that is especially rooted in the indigenous community of Monimbó that occupies the populous district of the same name. In its most authentic aspect, in the native, the Toro-deer seems to have an expression of mockery against the Spanish conquistador.

The Feast of Agüizotes or simply "The Agüizotes" is a traditional Nicaraguan celebration held annually as a tradition of the inhabitants of the city of Masaya since the mid-twentieth century and takes place the last Friday of October, with a previous On Thursday night with the long-awaited "Vela del Candil".

A few kilometers from the city of Masaya is the Masaya Volcanic Natural Reserve, where it is possible to see from the crater Santiago the lava and the fumes from its interior. Known since the time of colonization as "The Mouth of Hell" touring the Reserve is an experience that can not miss.

Less known but of equal interest is the Masaya Lagoon, located in the Masaya Volcano National Park. Of great interest to nature lovers and excursions.

One of the biggest attractions of this department and of the country is the Laguna de Apoyo Natural Reserve. Apart from enjoying its landscapes, its natural environment, its crystal clear waters and refreshing baths, you can do a number of activities such as hiking, horseback riding, kayaking The paragliding.

Around the lagoon there is a great variety of services oriented to satisfy the needs of the visitors, from food, to sale of crafts, culture and fun as well as where to stay.

Catarina and its lookout

If you visit the Laguna de Apoyo you can not miss visiting one of its most famous viewpoints, such as El Mirador de Catarina, in the municipality of Catarina.

If nature is involved, you can visit the Tisma Lagoon Natural Reserve, which is one of the RAMSAR sites. It is a wetland of lacustrine origin formed by the Tisma Lagoon, the Tuela Playuela, the Laguna Amapa, the Estero de Poneloyo and part of the Tipitapa River. Its territory extends through the departments of Managua and Tipitapa, in the latter in the municipality of Tisma.

In the department of Masaya there are part of municipalities that make up the so-called "White Villages" (Catarina, San Juan de Oriente, Niquinohomo, Nandasmo, Masatepe / of the department of Granada, Diriá and Diriomo). Its name comes from the white color in which the walls of their houses are painted with lime. Another characteristic of the White Villages is the elaboration of crafts, emphasizing the one of ceramics, the saddlery and the elaboration of furniture of wicker and wood. Its streets and roads are painted a thousand colors and filled with smells from the flowers and plants of their nurseries.

In Nindirí you can approach the history of this department by visiting the Tenderí Museum and the Ethnographic Museum Nacudari.

Niquinohomo, the cradle of the General of Free Men, Augusto C. Sandino, was declared Historical Patrimony of the Nation in the year 2002.

If you visit Masatepe do not forget to try what they say is the best modongo soup in the country.

Official page of the Government of Masaya

HOW TO GET MASAYA?

To arrive to Masaya from Managua is very simple, it is necessary to take for 30km the road to Masaya, located to the south of the capital, remodeled recently and perfectly signalized. The same road will take you to the neighboring city of Granada. To arrive by bus from Managua, you can take them from the bus stop of the UCA, leave frequently and take you to the destination quickly.