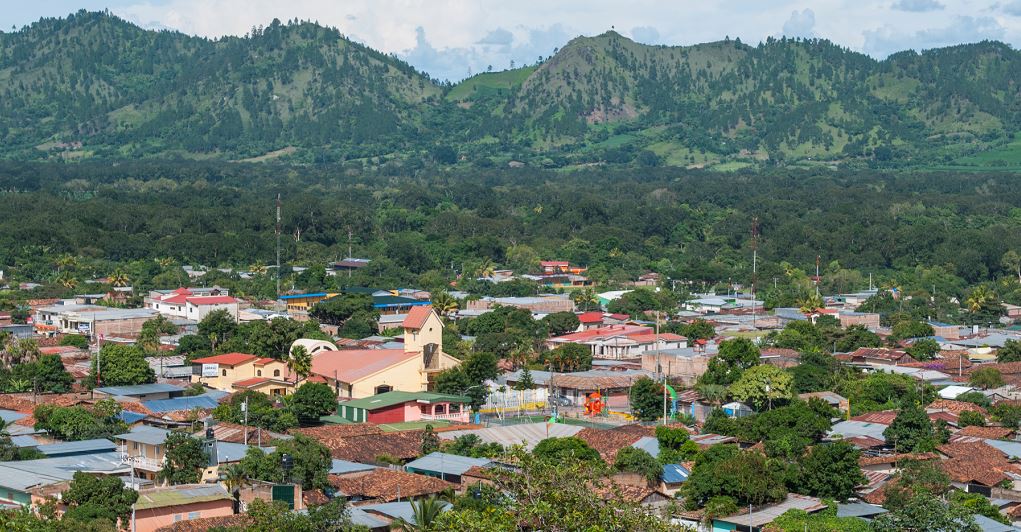 Jalapa is a city located in the north of the country, in the department of Nueva Segovia, in the border area with Honduras.

It was founded in 1891 and has an extension of 657.5 Km2, is located 300 kilometers from the capital Managua, and 73 of the departmental head, Ocotal. It has a tropical-humid climate with an annual average temperature that oscillates between the 17º and 24º

In the city of Jalapa you can visit the Church of Guadalupe and the house of culture, located in the same building, where various exhibitions and cultural activities are organized.

In the central park is the only sculpture of Nicaragua, the Goddess of sweet corn and fertility, Xilomen, 5 meters high.

The name of Jalapa comes from the Mexican voices and means "Place of sandy water". It is presumed that in pre-history the area where the city of Jalapa is located was a lake, hence its meaning.

Metamorphic rocks of the Paleozoic have been found, considered as the oldest rocks known in Nicaragua.

On the road to Teotecacinte, on the outskirts of the Tauquil community, archaeological vestiges of snails and dinosaurs have been discovered.

Of the colonial period they are the ruins of a Spanish temple with date of the year 1531, in the community of Rio Arriba.

Also are some constructions of the already disappeared town of Minas of the Holy Spirit in the region of Teotecacinte,

Which is presumed to correspond to an oratory constructed by the settlers of the town of Poteca between 1645 and 1655 by order of the interim governor of the province of Nicaragua, Don Andrés de Arbieto y Ozaeta.

Jalapa is the largest and largest city in the department, it is located in one of the most fertile areas of the country along with Matagalpa.

Jalapa was formerly known as the "granary of Nicaragua" or also as "the new milpa of Nicaragua" due to the high production of basic grains, especially of maize.

Its economic activity is centered on agriculture, where corn and bean crops stand out;

Mountain coffee of a quality recognized nationally and internationally is cultivated.

Native denominated with the same name of the city, Jalapa.

The export of cigars has emerged as one of the main economic sources of the area.

The production and exploitation of pine wood is representative in the area.

Large village located between mountains and very long finquera tradition, visiting Jalapa is a good experience in which you will get to know firsthand the authentic life of the mountain.

Jalapa is part of the Serranías Dipilto-Jalapadonde Nature Reserve, where you can enjoy its natural riches, a spectacular flora and a great variety of fauna.

The cool and pleasant climate of Jalapa has propitiated the existence of a great variety of flora and whimsical nature worth admiring that can not pass up the opportunity to know.

In the forests of the area of ​​Jalapa there is a great variety of tropical flowers, especially orchids and bromeliads, giving a spectacular color touch in the middle of the pine forests.

In the pine forests still white tail deer is seen and in the thick of the mountain have been seen pumas.

Among the most common snakes we find: Cascabel, Boa, Tamagás.

In the middle of the Dipilto-Jalapa mountain range, with a smell of pines and damp soil, is located in a private estate, the Cascade El Escambray, in the community with the same name.

An impressive natural jump where you can enjoy a crystal clear water bath.

Nature offers us in two different places of the municipality the presence of medicinal thermal waters.

In the community of Limón, on the banks of the river Jícaro, you can take a bath of hot and healing waters, which arise directly from the mountain.

The warm waters of the Limón are located about 3 km.

To get to Limón, take the junction to Limón about 18 km before reaching Jalapa from Ocotal.

In the community of Teotecanite, in the Finca la Vuelta del Pedo, you can find a well with sulphurous waters with healing properties.

In the last decades, rural and agroecological tourism has been developed, responsiblely enhancing the natural resources of the area.

Thus have been appearing coffee and tobacco farms as well as tropical flower production that offer visitors the possibility of knowing the natural wealth of the area, the production processes of the products, and where to enjoy the Northern gastronomy.

We can find in the area an offer of restaurants and dining rooms, hotels and lodgings where you can sleep admiring an incomparable natural environment.

In the zone of Jalapa elaborates a craftsmanship of the region, of high variety and quality.

These handicrafts are made with the pine needle and most of them are produced by families of artisans who have passed the tradition from generation to generation and are also produced in women's cooperatives of various communities,

That have appropriated the cultural rescue transforming it into an initiative of tourism and economic development.

Some of them are in the community of Champigny 5 kilometers from the city of Jalapa.

Jalapa is also the host of one of the most popular celebrations in northern Nicaragua,

The National Maize Fair held in the fourth week of September.

It is mentioned that in the first edition of this festival the renowned Latin American writer Gabriel García Márquez was present, who said: "it is easy to enter Jalapa, the difficult thing is to leave".

At the Maize Fair you can taste the variety of foods and typical dishes made with corn.

Throughout the days that the activity lasts also is realized a horseback, cultural activities that try to recover the traditions as well as the election of the queen of the maize,

Where contestants wear dresses elaborated with the different parts of the maize: its grains, the tuza ...

HOW TO GET TO JALAPA?

From Managua it is necessary to look for the exit of the airport Cesar Augusto Sandino, towards the north of the country, direction to the cities of Estelí or Ocotal. At Km 105, from the junction of Sébaco, follow the Panamericana highway north

From the Bus Terminal of the capital of Managua, direct express buses leave for Jalapa.

The trip is about 5 hours with good road on the Pan-American highway.

There are also "ruteados" buses from Managua to Jalapa, which are cheaper than the express, but the journey can last up to an hour and a half or two hours more than an express bus.

From the bus terminals of the northern cities of the country, Estelí and Ocotal, express buses leave for Jalapa.