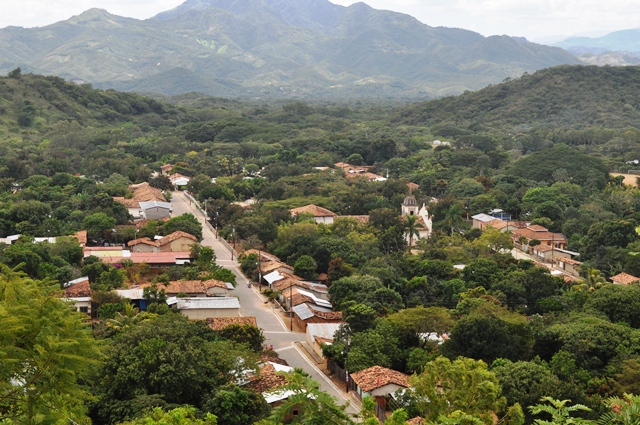 The meaning of the word Mozonte is 'peoples between rivers and hills' although it has also been given another meaning 'the hill of pozol'.

Mozonte was inhabited by the indigenous population of the Chorotegas, descendants of which the town continues to inhabit today, preserving its traditions and culture.

Enslaved and forced to work in the mines in the extraction of gold, this population did not escape the barbaries of the Spanish colonizers and suffered its hard consequences.

In spite of the harsh situations that faced they obtained their Real Titles, dated 1773, that recognize the ownership of their lands.

All documents are stored in the Office of Indigenous Peoples, an authority that governs the current indigenous population.

We can not go to Mozonte and not visit its Parish Church of San Pedro and San Pablo, built in 1703 and Baroque style.

Inside it is The Parish Museum contains authentic jewels, such as a collection of Latin missals and religious breviaries from 1763 to 1788, there are also objects of silver embossed, such as candelabra.

A new museum room dedicated to Monsignor Nicolas Antonio Madrigal y García was built, which is buried in the parish grounds and whose figure is in the process of canonization by the Vatican.

At the top of the Loma Santa is the Hermitage of the Miraculous Virgin of Guadalupe, an interesting place to visit both the hermitage and the panoramic views that can be seen from the top.

This small town has been known nationally and internationally for its handicrafts made in ceramics.

Throughout the municipality we find an uncountable number of workshops that elaborate a great diversity of decorative objects and for the home.

In recent years some families and women's cooperatives have opted to expand the type of handicrafts and now it is also possible to find in Mozonte crafts made from wood and pine.

The Mozonte Artisans' Association has a workshop and a point of sale, where it is possible to know the whole process of elaborating the different crafts and to buy some of its products.

In the territory of the municipality of Mozonte, 7 kilometers to the south of the urban helmet, is the Cerro Guasara that houses a forest reserve and a lot of legends and myths.

In the area you can take a refreshing swim as there are several pools.

In the community of Los Arados, there is the so-called "Holy Well", where Monsignor Nicolas Antonio Madrigal made a small poplar with the hands of the community river and this brolló salt water.

The people believe that this water has healing properties.

There are in the municipality lime mines where you can know the whole process from the extraction to the commercialization of this raw material.

There is in this municipality an equestrian center El Cortijo San Ignacio, if you are lover of the world of riding you will have the opportunity to approach authentic thoroughbreds.

Part of the territory of Mozonte is within the Serranía de Dipilto-Jalapa Nature Reserve.

Mozonte celebrates its patron saint festivities in honor of St. Peter and St. Paul on June 29.

HOW TO GET TO MOZONTE?

If you travel by private vehicle from the city of Ocotal you have to take the road that goes to Jalapa.

If you travel by public transport you have to take a bus at the Ocotal terminal that goes to Jalapa.