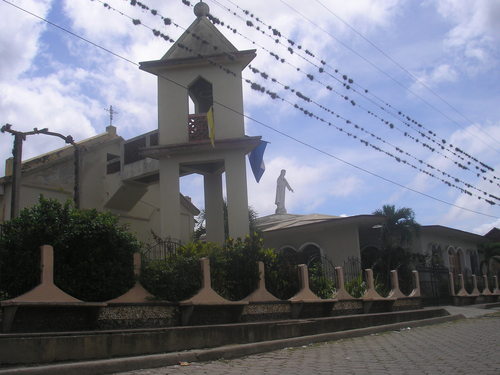 San Fernando also has the privilege of being the municipality where the hill is located Mogotón, which is the highest point in Nicaragua, 2,106 meters high and is located less than 20 kilometers north of the town.

The municipality of San Fernando was created the 7 of October of 1897 by decree of law of the government of the General Jose Santos Zelaya.

Known as the city of Cheles by the light color of its skin of the majority of its inhabitants descendants of the Spanish colonizers.

Its main tourist attraction, little known nationally and internationally, are its hot springs and its geyser. These are located in the limits of three municipalities, El Jícaro, San Fernando and Jalapa;

The entrance is located in the community of Aranjuez, 19 kilometers from San Fernando direction Jalapa.

The thermal waters are known by several names, Aguas Termales Aranjuez, because they are located in the community that bears this name, Hot Springs Muyuca.

Because it is said that the cacique Muyuca baths in them, and also with the name of Thermal waters "Don Alfonso",

Last name with which it has been made known by its owner, cooperative coodetur Las Segovías, which aims to offer the first cooperative tourist project in the country.

At 9 kilometers from the community of Santa Clara two kilometers on the road that goes to the Colony Ramos, before reaching Muyuca, there is a sign indicating the entrance to the hot springs and where the visitor has to buy the ticket.

There are several places to take a bath in the hot waters with medicinal properties in the middle of the gases that give off and the smell suffers. Another possibility is hydrotherapy, or mud baths.

Part of the territory of this municipality is within the Dipilto-Jalapa Cordillera Nature Reserve. To 14 kilometers of the urban helmet within the Reserve, by the entrance of Las Camelias, is El Salto San José,

Whose waters from the top of the mountains, fresh and crystalline, precipitate in a natural jump, amidst a spectacular nature.

In San Fernando there are several agro-tourism farms that are dedicated to the production of coffee.

The farms offer accommodation and food, as well as the possibility of hiking or visits to various tourist attractions in the region.

Among the fincas stands La Finca Forestal San Nicolas situated in the community of San Nicolás, in the region of Santa Clara, municipality of San Fernando, at kilometer 267 road to Jalapa.

In the farm there is basically pine of the species Pinusoocarpa and caribaea.

The farm has received several awards, including the best forest management at the national level.

The festivities of San Fernando are the 14 and 15 of September coinciding with the Fiestas Patrias.

HOW TO GET TO SAN FERNANDO:

If you travel by own car from the City of Ocotal, you must take the road that goes to Mozonte-Jalapa.

If you are traveling by public transport from the City of Ocotal you should take a bus that goes to Jalapa, Quilalí or Wiwilí.