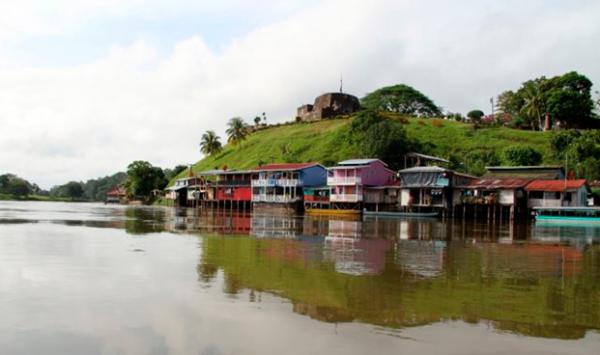 The municipality of Castillo is located 350 kilometers from the capital Managua, and belongs to the department of Río San Juan.

This municipality is marked by its history.

It was constructed by the Spaniards between the years 1673 and 1675 with a defensive objective before the constant attacks of the pirates who happened by the zone towards Lake Cocibolca.

In 1762 he emphasized the heroic role of the young Rafaela Herrera Sotomayor who fought against the English troops that attacked the fort.

In 1780 the fortress was attacked by English troops, where Horacio Nelson participated, that years later would become famous to participate in the Battle of Trafalgar.

Nelson gained control of the fortress but did not last long.

There is in day the hill from where they attacked the fortress still bears the name of Lomas de Nelson.

Today you can visit the Fortress where there is a museum and a library.

In El Castillo you can visit its Butterfly Factory, run by a women's organization.

In the territory of El Castillo there is the Indio Maíz Biological Reserve and several Private Wild Reserves.

The Indio Maíz Biological Reserve is virgin nature in pure state, most of the extension of the reserve can not be visited,

Are only very well defined areas where it is allowed to enter, but only with a guide.

To know the Reserve you have to go and be prepared, with a suitable footwear as well as the clothes, since one opens the jungle pass inside.

Do not forget to bring enough water as well as a good mosquito repellent.

You can enter the Reserve by two points, either from El Castillo by the Rio Bartola or by San Juan del Norte.

Without doubt an unforgettable experience only suitable for adventurers.

HOW TO GET El Castillo RIO SAN JUAN

To get to El Castillo you must take a panga from San Carlos.