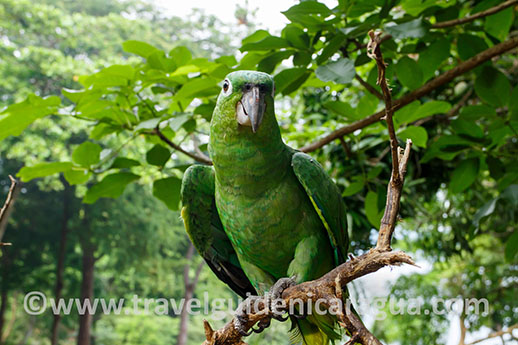 El Brujo - Chocoyero Nature Reserve is located 30 km from Managua in the municipality of Ticuantepe.

Chocoyero-El Brujo is one of Nicaragua's 78 protected areas and one of the smallest in size. It was declared a natural reserve in 1993 and is administered by MARENA, (Ministry of Environment and Natural Resources.)

Activities to do in El Chocoyero:

The Nature Reserve of 'El Chocoyero' is perfect for hiking and nature watching.The last seven kilometers of its entrance are not paved, reason why they cross plantations of pineapple, coffee and banana.

The species that predominates most is the parakeet of the Pacific, known as chocoyo, hence the place called Chocoyero.

The reserve is famous for the abundance of species of "green parakeets", also known as "Chocoyos", whose nests are near the falls. These can be seen in large quantities in the mornings and afternoons.

In Chocoyero walks it is common to hear the sound of congo monkeys, which can be easily seen on a trail dedicated to the sighting of this species.

In the refuge of the reserve have been identified 56 types of mammals, 33 species of reptiles, 11 types of amphibians and around 163 species of trees and shrubs.

The roads in El Chocoyero have different lengths and difficulties.

The Adventure trail leads to the mountains and takes about 6 hours to complete. Where you can enjoy the beautiful views of the reserve and its surroundings. Where you can see from the top the panorama of some cities.

The rest of the roads are shorter and are directed to the waterfalls. The two waterfalls that can be found in the reserve are:

"Chocoyero y el Brujo" and "The waterfall of El Chocoyero". The last one is where the chocoyos nest.

These waterfalls are small but deserve climbing. Its water comes from the rain of the mountains above and is collected and then used as drinking water by nearby communities.

Another important fact of the place is that you also have the option to camp or to stay in the cabins that are in the shelter.

How to get Chocoyero Nature Reserve?

To get there from Managua, take the highway to Masaya, at km 14 turn right in the direction of Ticuantepe, then head for the road that goes to La Concepción (or La Concha) and arriving at km 21.5 You will see a sign indicating a dirt road turning to the right that says "Chocoyero", and from there you only have to follow the signs that indicate the route, traveling about 8km until you reach the refuge.

Because it is a dirt road with irregular surface it is recommended to make the old one in 4x4 vehicles.

To travel to Ticuantepe by public transport you have to go to the Roberto Huembes market in Managua where there are buses and minibuses that go to the town of Ticuantepe and other nearby towns, these means of public transportation leave every hour between 7:00 am and 5: 00 pm throughout the week.

Once you reach the town center of the municipality, you can hire the motorcycle taxi service that will take you to the Chocoyero refuge.