Playa Astillero is One of the main fishing villages of the municipality of Tola, is in its extreme north. Access here is complicated without a car, perhaps that has meant that there are not many places to stay or eat.

However the beach is a natural jewel, turtles come to spawn and it is the village that precedes the Wildlife Refuge of Escalante-Chacocente River, which can be reached by walking 7 km along the beach from Astillero or in 4 × 4 In case of having it.

The Rio Escalante-Chacocente Wildlife Refuge, declared a refuge in 1983, extends from the department of Carazo in its greatest extent and to a lesser extent in the department of Rivas, specifically in the municipality of Tola. It has an extension of 12 kilometers between which we find one of the nine beaches in the whole world where there is an authentic spectacle of nature.

The massive arrival of turtles that go to the beach to lay their eggs. The turtles that arrive are of the diversamities paslamas, tora or leatherback, tortoiseshell and torita that is in danger of extinction. 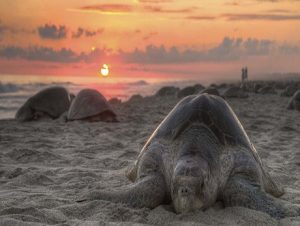 Turtles usually go to the beach on a waning or new moon, and it is not possible to predict the exact dates of their arrival.

During a season there may be 7 arrivals, 2 of which are more massive, and at each arrival it is estimated that up to 15,000 turtles can arrive at the massive arrivals and about 3,000 at smaller arrivals.

Studies have stated that turtles are looking for exactly the same point each year to lay their eggs. The process of incubating the eggs is about 45 to 55 days, later the turtles emerge from the sand to reach the water.

The entire process is monitored and controlled by local and national authorities to prevent the theft of eggs and turtles by poachers, as their commercialization, despite being prohibited, is still part of a subsistence economic alternative for many families Of the area.

Apart from the turtles inside the shelter we can observe one of the last redoubts of dry tropical forest and a great variety of fauna, where the diversity of birds stand out.

The entrance costs $5 and the services of a local guide about $3. Within the Refugio lodging service is offered that ranges from $15 to $50 . It is also possible to find food services and organized tours inside the shelter.