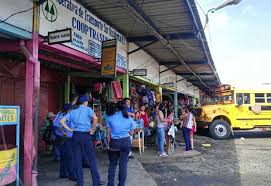 The "Israel Lewites" market popularly known only to Israel is another of the 8 established markets in the city.

It is located in the southwestern part of Managua. The name is to remind a young man fallen in October of 1977 in Masaya, and who was brother of the late exalcalde of the capital, Herty Lewites.

The Israel Shopping Center is 36 years old. In the beginning, the market was called Boer, but in the 80's the name was changed to the current name.

It began as a very small market with limited space, but over the years it has been growing more and more, becoming the popular market of the area.

This market has always been characterized by having the best sale of all kinds of seafood and by the quality of them.

In Israel you can also find fruits, vegetables, household goods, etc. And although it is said that the prices of some products are high, because their supply comes from the Eastern Market, their prices are cheaper than that of supermarkets.

The Israel market consists of about five blocks, where apart from the space intended for merchants, it houses a bus terminal and six ample parking spaces.

The Israeli bus terminal is located on the north side of the market, these buses are directed towards the West departments of Nicaragua: León and Chinandega.