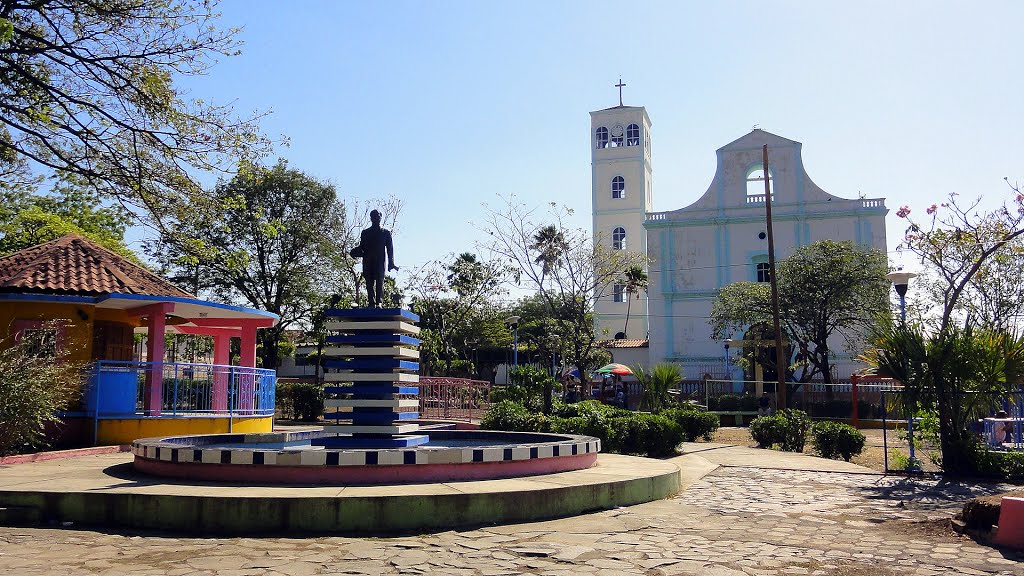 90 km from Managua, and 45 km from the departmental capital, Matagalpa, Ciudad Darío is famous for being the birthplace of the great poet, prince of Spanish letters and national hero.

This city has much to offer the tourist who visits it.

As we get closer to this municipality, coming from Managua, we are surprised by the particular beauty of the Moyoá Lagoon.

Las Playitasnos offers a great gastronomic offer where you can taste the freshly caught fish from the lagoon.

We find informal sales of chocoyos that paint bright colors on each side of the Panamerican Highway, as well as their craft stalls made with bejuco, which year after year gain recognition and distinction in the area and throughout the country.

Around 1627, missionaries of the Spanish order of the Mercedarios settled in Metapa Valley, thus giving origin to San Pedro de Metapa, or as it was known for centuries.

In 1891 it was elevated to the city and it was on February 25th 1920 that the name was changed to Ciudad Darío, in honor of the great poet and writer of international fame.

Located in the heart of the Sébaco valley, Ciudad Darío is the second most important city in the area. Its main economic activity is agriculture, cattle raising and the exchange of goods.

It's a town mostly by the way, for the tourist offers some restaurants with typical food at popular prices and some other lodging where you can spend the night.

To get to Ciudad Darío, the visitor enters through the Paseo de los Poetas or Poetas Boulevard,  finished in the year 2000, where busts of several world-renowned writers and some nationally relevant personalities welcome him.

In the center of the city is the church of San Pedro, built in 1620 and being one of the oldest in the country.

The historical museum Casa Natal Rubén Darío, declared a National Monument in 1943, is a must-see in the city.

The original rustic structure of the house has been preserved, inside we can see the furniture and personal objects of the writer.

In the courtyard, a Roman amphitheatre-style auditorium was built with capacity for 400 people, where a variety of cultural activities are held.

Visitors can arrive at the museum from Tuesday to Sunday and the entrance is 10 cordobas for nationals and 20 for foreigners.

Laguna de Moyúa is integrated in the natural complex formed also by Lagunas de Tecomapa and Las Playitas, and they are included in the list of 9 Wetlands of International Importance by the Ramsar Convention (Lacustre Playitas - Moyúa - Tecomapa).

While Laguna de Moyúa is permanent, the other two are irregular depending on the season.

Pre-columbian past of Ciudad Dario

In Laguna de Moyúa we find two islands, Isla Honda and Isla Seca, where pre-Columbian remains and pieces of Chorotega ceramics have been found.

This complex, in spite of being quite unknown and very little popular with tourists both nationally and internationally, offers the visitor several possibilities to enjoy its charms.

We can take a boat ride for a modest price of about 50 cordobas, or just take a comforting bath in one of its spas to reduce the heat,

We can walk along one of its trails to get close to the wild animals that live in the area, as well as bird watching.

If your interests are excursions, hiking and discovering Nicaragua from the heights, the perfect option is to climb Cerro Güisisil, with 1,120 meters high, where you can see from one of its two viewpoints, on a clear day, the volcanic mountain range of the Pacific Ocean.

Cerro Güisisil was decreed as a Municipal Ecological Park, and it is of great importance at an environmental level, since in the area there is a pine forest considered one of the last remaining forest of this species.

And where is the species of Oocarpa pine that is difficult to find in the continent.

An ideal place to take a refreshing bath is El Orégano Falls.

If the visitor wishes, he or she can lodge inside the reserve in a camp that is located in the community of Totumbla.

In Ciudad Darío, religious festivals are celebrated in honour of the Virgin of Fatima, among others.

The Darian Day is also celebrated on January 18th, in celebration of the poet's birthday, 8 days of celebration and cultural activities.

If you are going to Ciudad Darío, try one of its gastronomic delicacies "oven stuff", if you arrive by bus to the city, there are several vendors who get on public transport to offer their passengers these delicacies.